First of all, special thanks to Gaston Riera for helping me with the translation!

At Funnel Punk we have been working on grouping data for quite a while, some of which are based on keywords. Some of the uses we have for these databases are finding duplicates or title tag analyses.

As a sneak peak, this is an example of the final result we will get at the end of the article, a table grouping keywords (that for 99% of the cases mean the same), and we will also be able to see a breakdown for each term and for each URL. 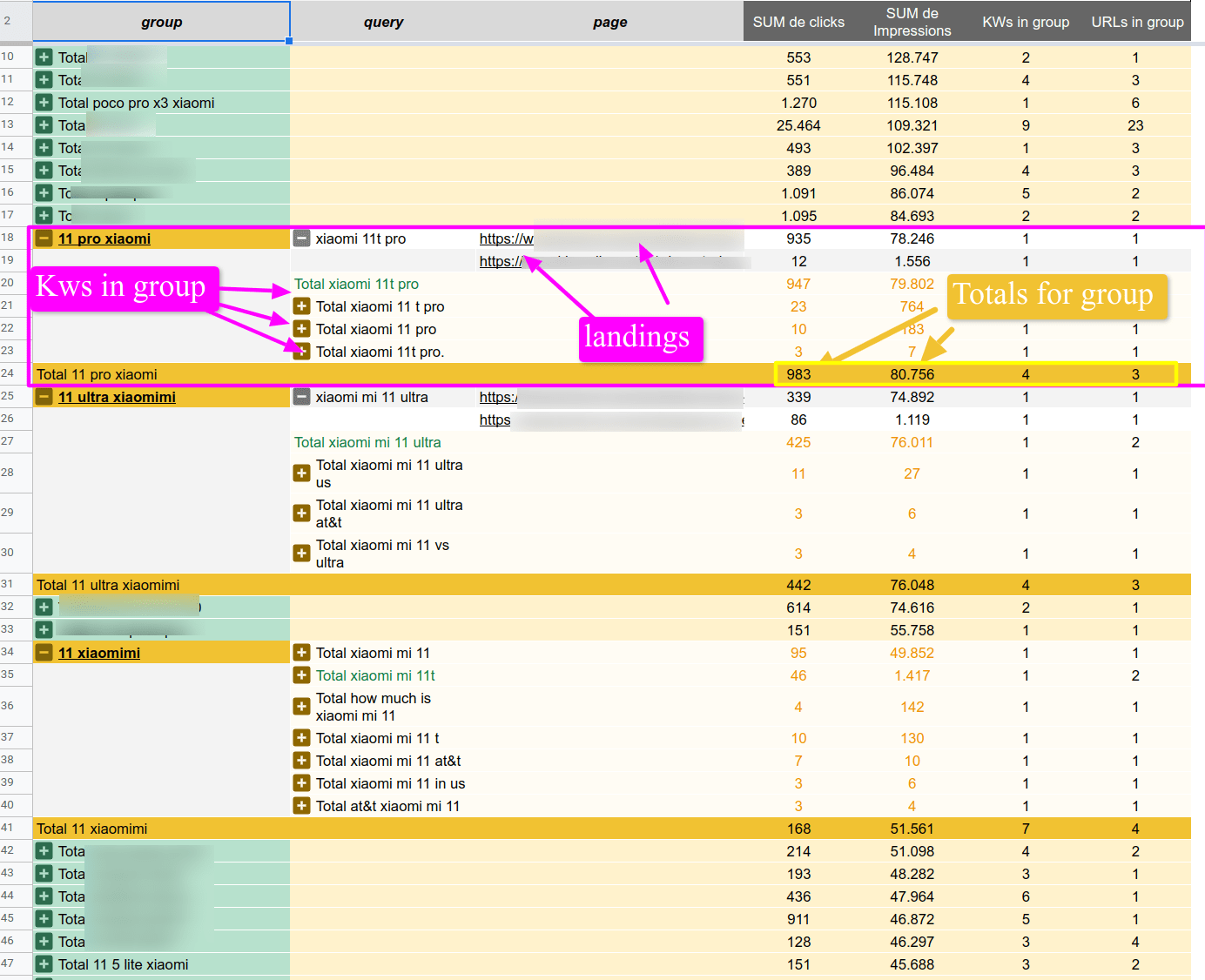 There are already lots of articles and templates that use different methods to classify keyword intention as transactional, informational and others, but I haven’t yet found an actionable grouping method that significantly improves the understanding of the variety of keywords by their meaning and not just by their search intent.

Classifying by search intent is helpful to find out if these keywords are relevant to the business, or for example, to customers in their buying journey. Yet, that does not help understand the entire universe of keywords, and it doesn’t make sense for all sites.

At FunnelPunk, we are actively trying to improve the grouping and classification of keywords… As long as it makes sense for the website :)

To me, grouping or clustering is different from applying rules that determine whether a keyword falls into any given category. In my opinion, that is classifying or categorising. As I said earlier, it’s very helpful for certain things, yet not so much to understand the whole universe of search terms that users use, related to the different topics of our website.

This method will show you clicks or impressions and URLs for the keywords in each particular cluster, and all of this without losing the search intent behind each term.

Having this info will help us have a complete view of each search intention and get other useful insights, such as having a better understanding of whether the clusters are well defined and that there are no ambiguous or incorrect terms.

It could also help find out if there is any other issue due to cannibalisation. However, if that was the case, a way deeper analysis would be required, as there can be cases of either positive or negative cannibalisation.

Usually, the simpler, the better it works.

In this example, we won’t use words vectors such as word2vec, nor will we use semantics to determine if a word is a name, adjective, verb, etc to assign one or another meaning depending on that. Won't even use the usual 'King - male + female = Queen' (I don’t like repeating what others are already doing).

The keywords that we SEOs use contain a few words and knowing that users usually don't follow proper grammar nor semantics when searching makes it useless to try to assign a meaning according to that keyword being contained within a "phrase".

As we did in a previous article when lemmatising, there won't be as many groupings and, verbs that have the same search intent or meaning within that keyword can be included in different groups when differentiating them depending on their tense or position in the sentence.

Let's use an example of lemmatisation vs. stemming, for those who didn't read that other article

We can see how the lemmatisation method is not the best one for our goal.

On the contrary, the stemming method gets it every time, grouping every term under the same group. That's why I think getting stems for the keyword grouping leads to much better results than lemmatisation, even though the latter is more sophisticated.

Taking a look at the code

I will explain a few things about this code.

Create a dictionary for specific words

It is important to mention that this dictionary is different from having a list of STOPWORDS, that is because the dictionary is a list of words that otherwise would be excluded, and the STOPWORDS list contains words that will be omitted (unless you don’t use that list)

Other than STOPWORDS, we are using rules to value or not specific words. Taking a look at the code, within the normalisation function there is code that looks like this:

The first line stores every word, according to two conditions, with "if not t.is_punct | t.is_stop":

With the last line, the one with re.findall("\d",t) we are capturing all digits and preventing them from being ignored. This step will vary in importance, depending on the project.

Yet, this is not enough as it is not capturing the phone model (‘mi’). To fix that, we can use the dictionary, and what needs to be done is to update the terms “xiaomi mi” with “xiaomimi”.

Given that the term ‘mi’ has two characters, is in the STOPWORDS list and we want to prevent it from being ignored, taking it out of the STOPWORDS list is not a good idea. That would allow that word to be used in other keywords that don’t have anything to do with the cluster, such as “Precio de mi Movil” (Spanish for “how much is my phone worth”) is not closely related to “Xiaomi”, however, if the term was “precio de mi Xiaomi mi” it should be included.

A way to do that substitutions is by using regular expressions, such as the one below which every 2 letter word that is of interest for us is substituted by the merge of the two words. With that substitution, these words will not be ignored. Suggestions to improve this part are always welcome!

Accept that there are things out of our control

When it comes to Machine Learning, (although this example isn’t “Learning”) most of us copy code we find on the internet, and that’s ok! It is important to know that depending on the project and/or the problem at hand, things can get very complex quickly. Even more if you have never worked in production environments, it is even worse in large companies.

I won’t stop repeating myself; remember that to become a Data Scientist, you need five years of Math studies and at least another four of a PhD to have enough experience and knowledge to fully abstract any real-life problem, particularly when working out all the math and statistics.

With all this, I want to make it clear that there might be other ways to do all this and that my code can be improved. If you work with Python and find improvements to it, please let me know in the comments! I’m more than happy to read them. :)

The code in Python

You will need data from Google Search Console, you can use my tool to download up to 50.000 keywords, as many times as you want for free! 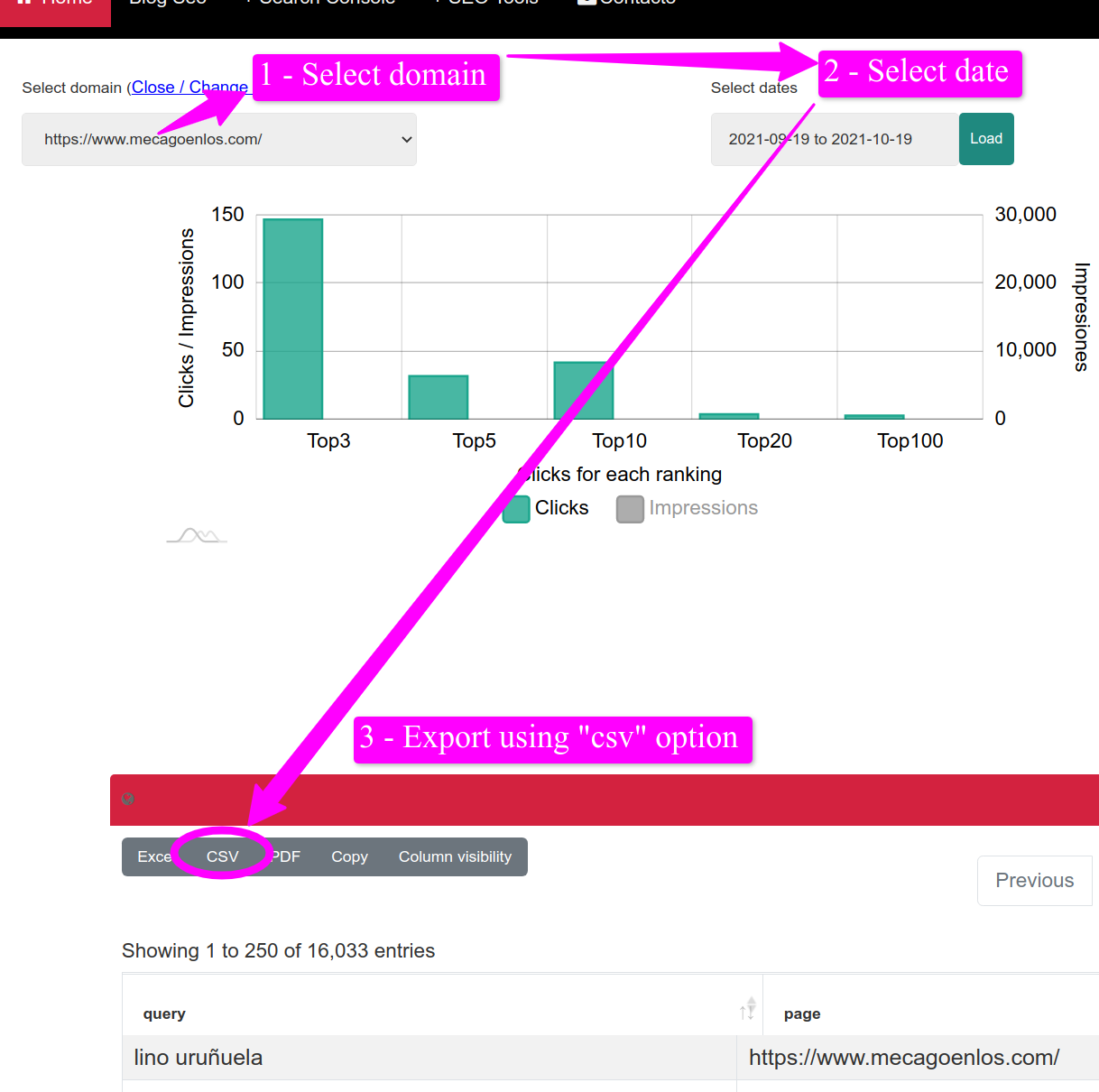 When the code finishes you will have a file with the output data.

The next step will be to create a dynamic table, for that follow these steps 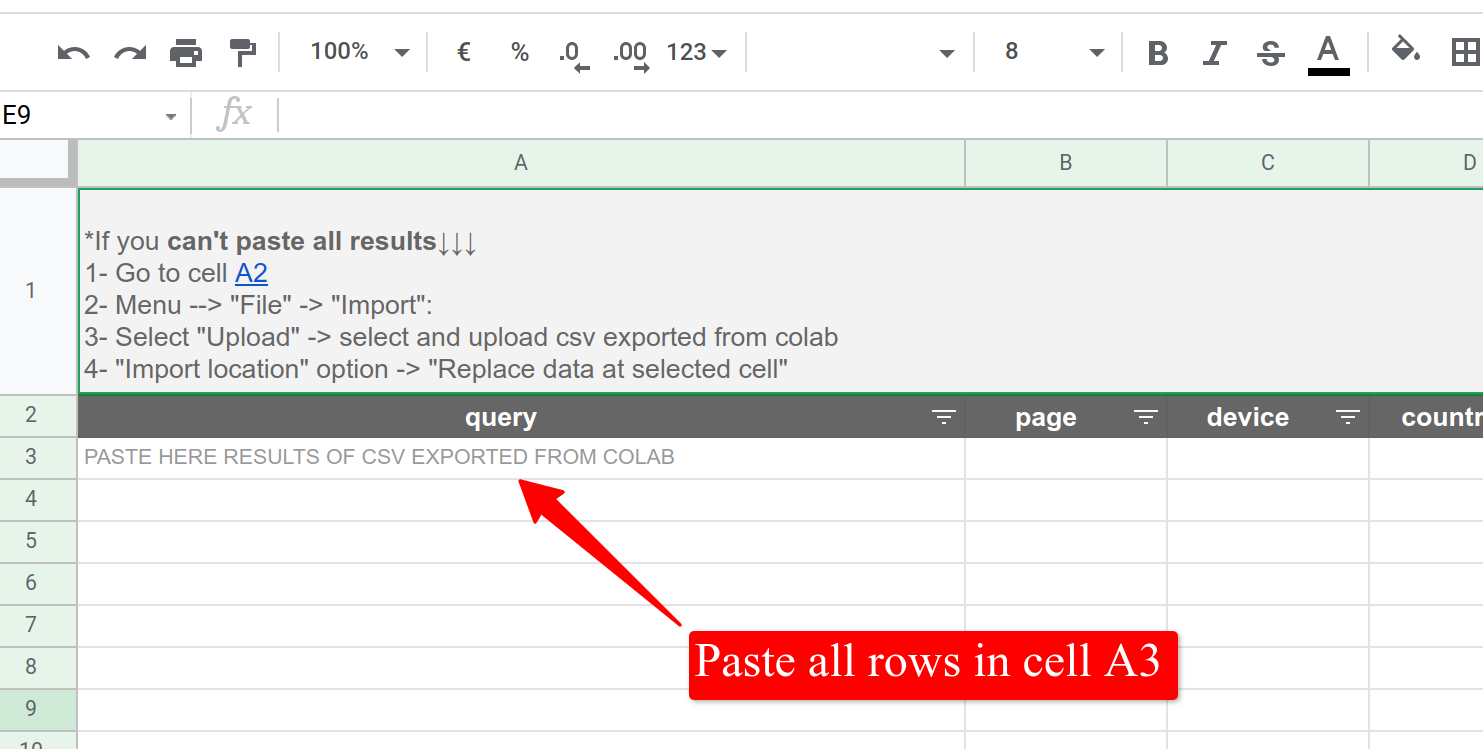 If you can't paste all rows in spreadsheet of Google, you can try this:

You can run the code from this Google Colab notebook. This way, you won't need to install anything on your computer to run it, with all the steps to create the dynamic table.